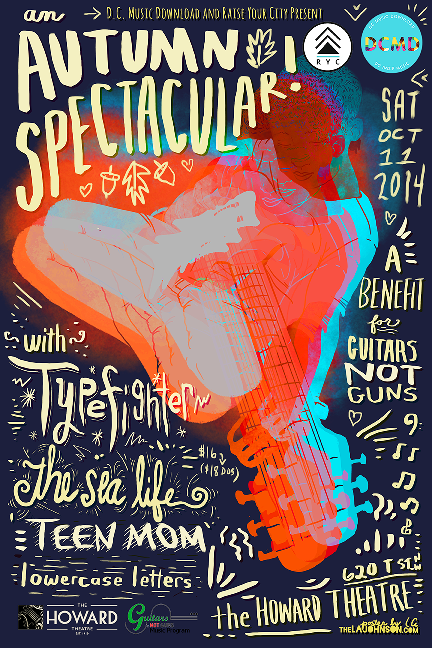 Saturday, October 11 2014 at The Howard Theatre
For one night only, D.C. will come together for a massive fall celebration complete with music, art and comedy to raise money for Guitars Not Guns (recently featured on ABC affiliate, WJLA).


This is an All-Age Event

Four of the District's top bands (see below) will headline this very special event at the historic Howard Theatre.

Featured in USA Today, Brooklyn Vegan and more national outlets, Typefighter has built a reputation for disarming melodicism. With their debut full-length "The End of Everything", the band has rewired its unique instrumentation into an arresting rock and roll record filled with pounding rhythms and roaring guitars. It's a big, snappy sound that lives up to the raucous live sets the band has delivered on stage with bands like Here We Go Magic, The So So Glos, Givers and We Were Promised Jetpacks. "The End of Everything" picks up where the sound of D.C. in the 1990s left off and ventures into uncharted pop territory.

The Sea Life has sold-out some of D.C.'s most prolific venues, which includes 9:30 Club and Black Cat. This dynamic group organically delivers infectious hits that comprise an exotic blend of shoegaze, indie-pop and general lo-fi fuzz. After releasing a full-length album in 2012, In Basements, the quartet unveiled its best work yet, called Transitions, on October 31, 2013. The release showcased The Sea Life's ability to craft emotive, catchy and candid songs. Onstage, the indie rockers bring a firestorm of energy and charisma that has quickly won over the District. This summer The Sea Life was also invited for a Daytrotter session.

Featured on MTV, Refinery29, Washington City Paper and more, the trio is set to release a full-length album this fall. With several hit singles under their belt — including the infectious and buzzy "I Wanna Go Out" —Teen Mom has proven to be unstoppable.

"Lowercase Letters’ signature becomes defined and created through a cohesion of playfulness, sultry situations, danger, and discovery. Alphie anchors the action in her lead vocals of satin and spiked punch, with bass curations courtesy of Clinton Cool, while the production powerhouse and beat considerations are compliments of John Beckham. Combining powers like a superhero faction force, Lowercase Letters keeps the capital lands fun." -Impose Magazine

LIVE SCREEN PRINTING by The Arcade!

COMEDY from our official MC of the night, Andrew Bucket!


This is an all-ages event!