First, there was the Shaw Ribbon Cutting Triple Play, where Mayor Vincent C. Gray cut three ribbons for new restaurants in Shaw in an hour in September 2013.

Then came the Shaw Ribbon Cutting Palooza in December 2013, when Mayor Gray cut five ribbons for new Shaw bars and restaurants in 90 minutes. 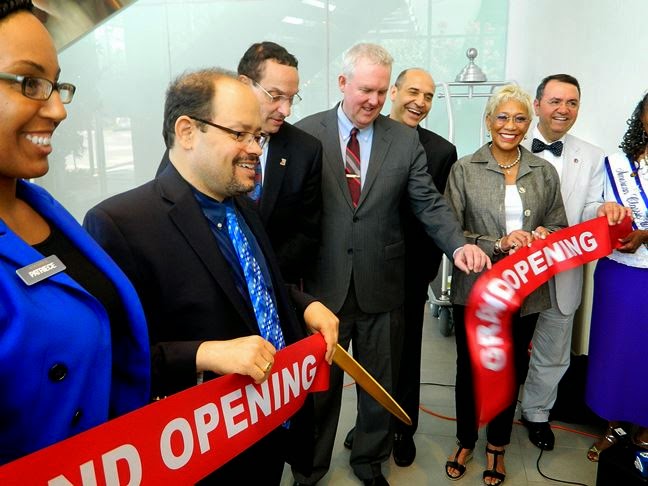 And in May 2014, Mayor Gray cut seven ribbons for new Shaw businesses during the Shaw Ribbon Cutting Marathon in two hours.

On Monday, December 29, 2014, starting at Noon,  Mayor Gray returns to Shaw for one last ribbon cutting event: the Shaw Ribbon Cutting Spree will celebrate the openings of six new businesses, the completion of nine new storefront improvement projects, and two new murals, a total of 17 ribbons to be cut in two and one half hours. Council Member Vincent Orange and Council Member-Elect Elissa Silverman will also participate in the event.


“We’re so pleased that Mayor Gray is honoring us by wielding the giant golden scissors in Shaw one last time,” said Alexander M. Padro, Executive Director of Shaw Main Streets, the commercial revitalization nonprofit serving central Shaw’s 7th and 9th Streets, NW commercial corridors. “After the last event, we were wondering what we could do to top cutting seven ribbons in one morning. I can’t believe we’ll ever be in a position to do this many ribbons again in one fell swoop.”

The event will start at Compass Coffee, 1535 7th Street, NW, a new coffee roaster and café, where an announcement will be made regarding grants to several Shaw businesses, as well as a recap of new business development in Shaw during the past year.

Following remarks and the cutting of Compass’ ribbon, the other ribbons with be cut in the following order:

The event will conclude with a reception at I Ching, 639 Florida Avenue, NW.

The Shaw Ribbon Cutting Spree is free and open to the public. No reservations are required. The event will take place rain or shine.