Its Spring ! Time to Move House 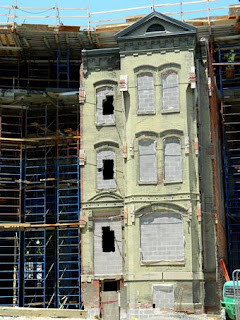 The preserved house, that was the subject of this posting is in place and awaiting its fellow preservees (is that a word? ) I was informed that a number of the other buildings will be positioned on or around the 15th of July, so get your cameras ready. I was also told that Clark Construction hope to have the concrete portion of the structure completed by late August, that will give everyone an idea of the shape and size of the building, and a hint at streetscape's on NY Ave and K Street. I would point you to the renderings (link below) 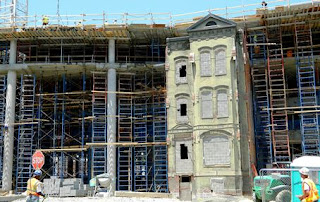 The development of the Association of American Medical Colleges (AAMC) new headquarters at 655 K Street NW is not news. Douglas Development have touted the plan and released the renderings and most folks have seen them. The work at the site has been going on since the middle of last year, and a few weeks ago the building raised its head above ground level.
As part of the project Douglas Development rescued 5 historic buildings, 4 from K Street and 1 from NY Avenue. These buildings were moved out of the way, 4 towards the 6th Street end of the lot, and 1 is located across NY Ave in the parking lot of Fringe.
Spring is here, and its time to move house, literally. Today the engineers loaded one of the houses (for those that are aware, the 4 story 'green' Victorian) on to its hauler and the move is proceeding as I write. I did have a chance to speak to the crew and they informed me that "for the moment, they are only putting one house into its final position" and that "all the houses have survived the move and storage and they will be placed over the coming year"

Happy that I had had my camera with me, and could get these photographs; Below are a number of shots of the rescued building and the move to place it back on K Street NW.