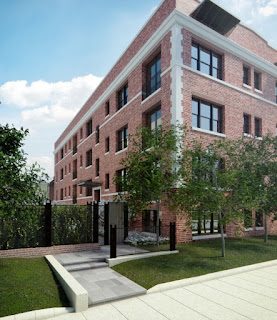 Just three blocks from the heart of Bloomingdale’s trendy dining strip, a former apartment building is being transformed into a modern condominium residence named Beale House. Urban Pace has launched pre-sales of the 16 homes, all but one featuring two bedrooms and two baths, at prices beginning in the mid $400,000s.

Beale House is one of three nearly identical apartment buildings at the corner of Second and W Streets, NW in Washington, DC that were originally built in 1926 and acquired by Bethesda-based MILLER in 2001, along with an adjacent empty lot. After working extensively with the property’s existing tenants, MILLER transformed two of the buildings into a successful condominium community, McGill Row. Now the company is undertaking a gut renovation of the third structure, located at 143 W Street, NW, with delivery scheduled for the end of the year.


“We are excited to bring high-end residential development to this iconic and historic neighborhood of Washington,” said Charley Struse of MILLER. Added Matt Dewey of Urban Pace: “Beale House provides an opportunity for buyers to purchase all-new condominiums in one of the city’s most sought-after residential neighborhoods at an accessible price. Less than a mile from the Shaw Metro, Bloomingdale and the surrounding area is home to the popular Red Hen restaurant, Giant, Harris Teeter, and many other destinations that make it the perfect spot for urban living.”

Beale House retains the original building’s brick façade, while its interior design by Cunningham Quill Architects has contemporary flair. Just inside the building’s controlled-access gate, a private courtyard by Landscape Architecture Bureau welcomes residents with shaded seating niches and seasonal interest. All of the residences will have large, energy-efficient windows, and all homes on the second through fourth floors have Juliet balconies Based on MILLER's extensive experience in bringing luxury details to the market, Beale House will offer an unusually high level of finishes for its price point. Each sleek, space-saving kitchen will feature Bosch stainless steel appliances, including a built-in oven with gas cooktop, concealed dishwasher, and built-in, concealed refrigerator. Other notable kitchen features include, under-mount stainless steel sink with a Hansgrohe brushed finish faucet, solid stone counter-top, and white high-gloss upper cabinets with under-cabinet lighting, complemented by light gray base cabinets. Luxury en-suite baths – one for each bedroom – will have frame-less glass shower enclosures, white high-gloss vanities, Hansgrohe fixtures, and large-format Italian tile.