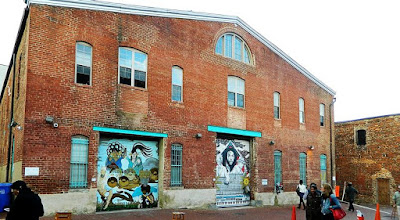 An ongoing exhibit of "Public Art Murals by DC Artists" located in Shaw's Blagden Alley officially opened today with works by 7 artists. Dubbed DC Alley Museum, the brainchild of artist Bill Warrell and supported by DC Commission on the Arts & Humanities, under the Public Art Building Communities Grant Program opened today (Saturday 30th October). Crowds of street art fans and artists came to Blagden Alley to see the official opening and to talk to the artists about their work. As you would expect the afternoon event was very well attended by people from all over the city.

Lets get to the murals;
(Where applicable I have added the web-sites, and highly encourage you to check out the artist's other works)

Bill Warrell's "A System of Politics and Art" is actually Bill's first Mural, a complex piece that spans the 70's featuring difference makers in DC's Art and Political scene. It features H Street NW and the Chinatown Arch. Can you put names to the faces? Note: A number of the people featured where at the ceremony today.
More Info on Bill Warrell Here 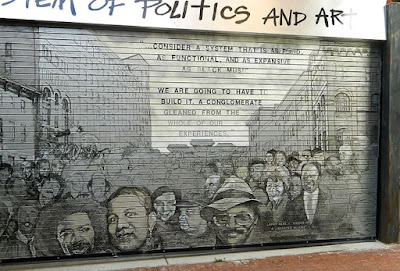 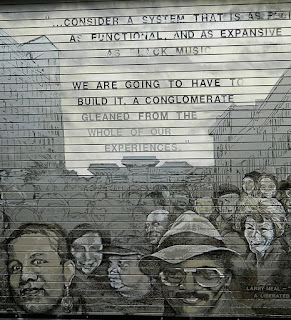 Lisa Marie Thalhammer, is a well known Muralist in DC her "Meditation" painted using gold paint is somewhat unique, depending on the time of day and the ambient light you may find that this powerful piece radiates gold back at you. Lisa has exhibit across the US, in city's like LA, NY, Miami as well as overseas in Austria and extensively in DC & the DMV.
More info on Lisa Here 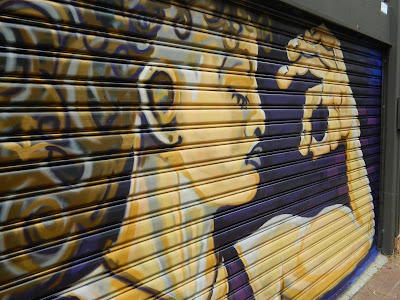 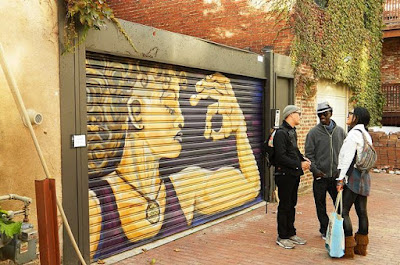 Rozeal Brown, who is among the elite of Muralists in the US, is a DC born and raised native who now lives in New York. She came down especially to work on "Maker of Saints" on Bill's request. Rozeal (Iona Rozeal Brown) is well know for her traditional Japanese forms/Hip-Hop mashups. The New York Times wrote "painter Iona Rozeal Brown has created a fantastical body of work that unites so many seemingly irreconcilable realities — Japanese ukiyo-e prints and hip-hop; voguing and Noh and Kabuki theater; West African adinkra symbols and graffiti; Byzantine religious painting and comic-book motifs — that it gives new meaning to the idealized space of the canvas."
More Info on Rozeal Here (I chose the Corcoran's "30 Americans" exhibit as a good starting place - Google will give you hundreds of hits) 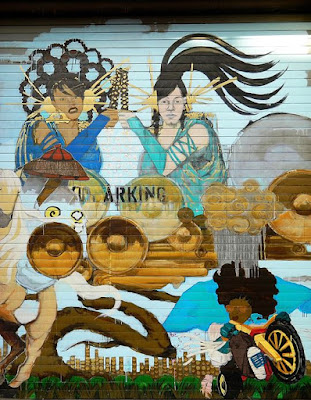 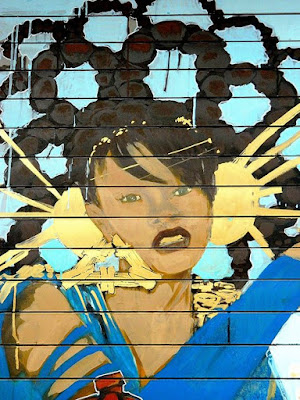 Aniekan Udofia is probably the most recognized of DC Muralist names. His work can be seen in many parts of the city, his iconic work in Adams Morgan and, especially, in Shaw (Marvin Gaye most famously) Duke Ellington, Fredrick Douglas and George Washington have all elevated him to that top spot. His "Space is The Place" on the main alley between M and N Streets features Sun Ra and Erykah Badu. Note: Sun Ra appears in 3 of the Alley Murals - can you find him?
More info on Aniekan Here  (I chose Aniekan's FB Page as your starting point) 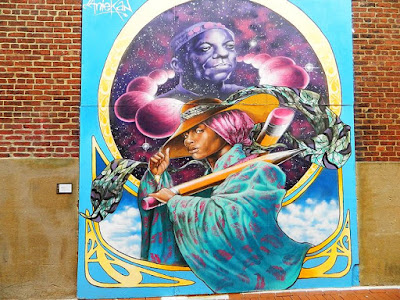 Cita Sadeli Chelove (Miss Chelove) has carefully constructed "7th & E Street NW DC" in homage to great DC musical talent and the DC club scene. Cita's work has featured in many East Coast city's  including Brooklyn, Baltimore and her work can be seen all over DC. (Adams Morgan and the Storey Park‬ mural collection in ‎NoMa are good examples)
More Info on Cita #MissChelove Here 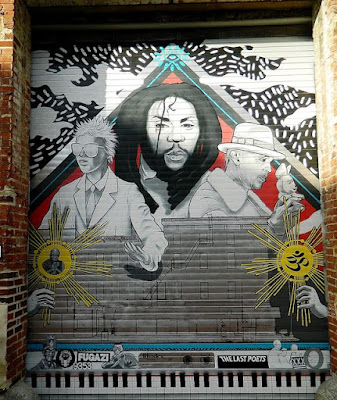 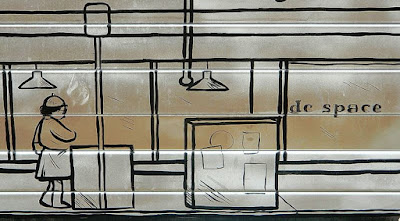 Craig Nelson, has been an artist living in Blagden Alley for a number of years. His mosaics are scattered around the Alley, and each deserves viewing as technical master-works in a fading art form. Craig donated "The Sitter" to the DC Alley Museum. Note; that this piece is taken from a 1920's photograph taken in the Alley, and although its current positioning is about 30 feet from where the picture was originally taken, this is part of the history and legacy of Blagden Alley. Note: The mosaic is constructed with over 32,000 natural stone tiles. It is one of two pieces not part of the DC Commission on the Arts & Humanities grant
More Info on Craig Here 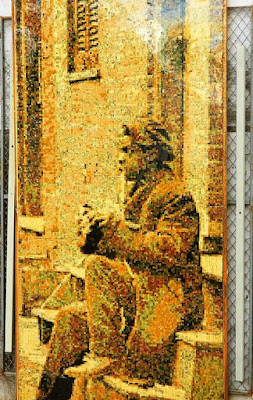 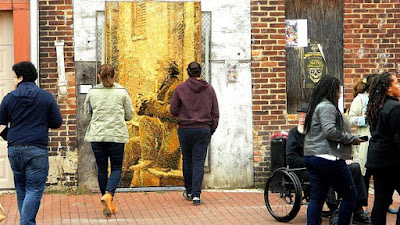 Kelly Towles provides the other no DC Commission on the Arts & Humanities grant piece. The whimsical "The Grate Project" was funded by the Creative Community Initiative of the Community Foundation. Kelly's work is well know in DC and was featured in the recent "DC Murals"  exhibit at the MLK Jr Library exhibition and notably in "The Yards" murals project last year. He has also created murals for the U St Music Hall, Toki Underground, DC Brau and Graffiato.
More Info on Kelly Here 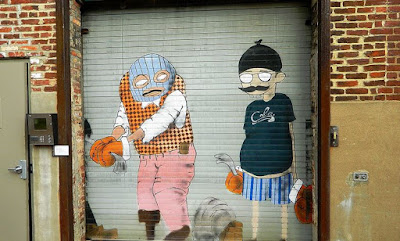 Notes On The Opening
The official opening was led by Bill Warrell, talked of his own struggle to get his first mural completed, the personal history he has with the Alley, his opening remarks also praised the DC Commission on the Arts & Humanities, and the Public Art Building Communities Grant Program, I believe that 4 of the 7 artists were in attendance as well as DCCAH Executive Director Lisa Richards Toney, ANC Commissioner, and Shaw Main Streets Director Alex Padro. 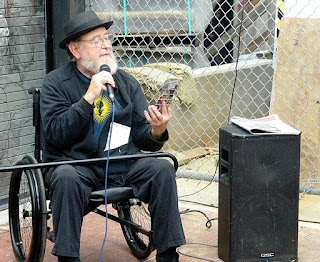 Alex Padro explained that both the return of art and the value to the neighborhood this project will bring are great examples of neighborhood's, their residents and the DC government coming together to produce unique spaces in the city. 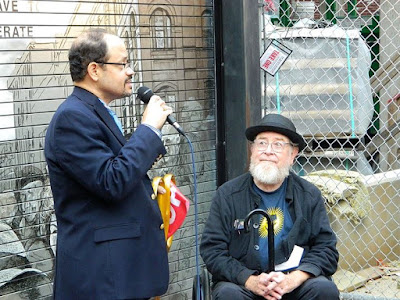 DCCAH Executive Director Lisa Richards Toney, spoke of the value of such projects and the continuing support that DCCAH will be giving to this and other 'public art projects.' Sadly Ms Toney also announced that today was her last day in her position as Executive Director (Ms Toney was also intimately involved with the commissioning of Zachary Oxman's 'Symphony in DC Major' on Shaw's P Street among other public art projects) 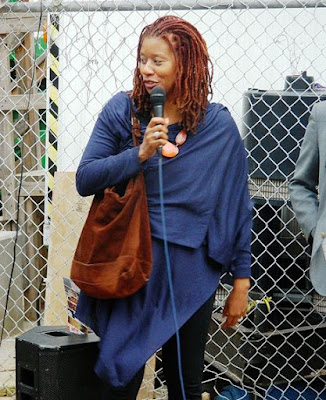 The final act was the cutting of the ribbon, Bill Warrell (correctly did the cutting), Lisa Marie Thalhammer, Cita Sadeli Chelove, Lisa Richards Toney and Alex Padro all took part. 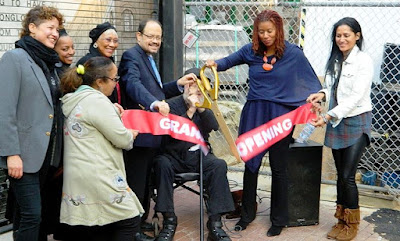 And so, Its Official.
Bill tells me that this is just the start, he hope's (with the local residents buy in) to expand the number of art-works over the coming 12 months (and beyond). DCCAH will have a say in this as well, but all agreed that the project so far has been a great success and expectations are high.

Visit the art in Blagden Alley, stay for a drink at Lost & Found or (soon) Columbia Room, eat at Rogue24 or (soon) The Dabney, or just hang-out, stroll the Alley and have a coffee at La Colombe.

*As a Shaw resident and as Badwolfdc, my thanks to the Artists, who all took the time to stop and chat as I meandered through the alley this past 4 months. To Bill Warrell for leading this effort and adding something special to the neighborhood and to DCCAH for supporting the "DC Alley Museum" project
Email Post
Labels: Art Scene Blagden Alley Naylor Court Exhibitions Local_Artists Logan-Shaw Other Events
Location: Blagden Alley, Washington, DC 20001, USA