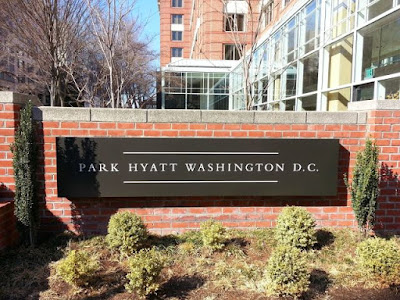 On Sunday, June 26, Park Hyatt Masters of Food & Wine will return with a whiskey-inspired seasonal culinary & beverage experience, in partnership with Washington, D.C.’s One Eight Distilling. This culinary gathering salutes the ingredients, flavors, and talents of local chefs, regional artisans and purveyors. Priced at $75 per person, all-inclusive, guests will enjoy a private tour of the production facilities with Co-Founder and Master Distiller Alex Laufer. Participants will have the opportunity to sample six whiskeys produced by One Eight Distilling, including varieties not currently available to the public, while enjoying paired seasonal, American cuisine created by Blue Duck Tavern Chef de Cuisine Brad Deboy.  Guests will also delight in a specialty cocktail crafted by Blue Duck Tavern bartenders using Rock Creek White Whiskey to close the experience.

Space is limited, tickets for the event can be purchased by calling (202) 419-6620 or emailing masters.phwashington@hyatt.com

Whiskeys being sampled during the afternoon include:

One Eight Distilling, founded by Sandy Wood and Alex Laufer, is named for Article One Section Eight of the Constitution, which among other things provided for the establishment of a district to serve as the nation’s capital. Their passion to build a distillery came from a desire to produce the finest spirits from grain to glass all within Washington, D.C. One Eight Distilling seek to continually make connections between people and their spirits, to use locally sourced ingredients, and to pay their respects to the time-honored traditions of distilling while bringing innovation and love to every bottle we fill.